About the ARRI / Zeiss Master Anamorphics

ARRI / Zeiss Master Anamorphics are modern, German anamorphic lenses that bring a completely new take on front anamorphic glass. They are unique because of their low-distortion, high contrast, edge-to-edge sharpness, subtle lens flares and complete lack of breathing. Their look is very clean and very modern. They still have oval bokeh and they can produce streaking lens flares, but they lack most of the “flaws” associated with front anamorphic lenses.
"What the Master Anamorphics afforded is a very aberration-free and distortion-free image. All of those properties create, what I would call the cleanest, most scientific anamorphic lenses."
Christopher Probst, Cinematographer

Zeiss really has been at the forefront of lens technology and this is the cleanest, sharpest anamorphic lens set ever created.  They retain many of the qualities of anamorphic and have minimal breathing and very clean color rendition. Being able to shoot a T1.9 with little to no penalties is an amazing feat. The housing and mechanics are incredibly easy to use and are much lighter and AC-friendly than some of the other anamorphic lenses out in the world. This is a great pairing for anything with VFX work and just plainly getting the best image out of your camera.  While they are very clean, sharp and contrasty it does loose some of those indescribable qualities that people love about shooting anamorphic.

Possibly the most advanced array of optics in our lineup, the ARRI Master Anamorphics have established a reputation for being too clean, too clinical, too corrected. In other words, boring. However, with the scene we were shooting we were able to coax out just enough stray light to give a pleasing, controlled anamorphic style to our otherwise “vintage” scene. The Master Anamorphics are also available with their even more crazy/wild Flare Set which replaces the front and rear elements with modified, uncoated groups direct from the ARRI factory.

In the little bubble of filmmaking that DP's occupy, we love to debate the pros and cons of lenses ad-nauseaum. If you survey a group of 20 cinematographers for what is the right anamorphic lens set for a project, you'll get 20 different opinions. Everyone's perceptions about how X lens performs in Y conditions is colored by their own shooting history, personal tastes, and a thousand other hard to quantify factors.

It's important to remember all of that when looking at lenses, and keep in mind that they are just one of many diverse tools in the box that you can use to tell a story.

With that said, evaluating Master Anamorphics is a breath of fresh air because it's just so easy to see how they stack up against other glass. You don't need to rely on hyperbole to try and define what makes them stand out. It's plain as day, and repeatedly measurable with charts and graphs.

Things like contrast, color rendition, MTF, breathing (there is none), focus fall-off, sharpness, and distortion are all superb, and perfectly matched between focal lengths. This gives you a clean refined image. A lot of the funkiness (and some would say character) of other anamorphics is kept to a minimum, and that is by design.

These lenses were engineered to not get in your way. For the cinematographer that wants to focus on the job of telling the story, without worrying about lens behaviors popping up to distract the viewer. They let your subject shine through in the best possible light, without calling attention to the method of capture. It's a neutral look with amazing separation between fore mid and background, and an aesthetic in it's own right. It's not for everyone or every project, it's not for people who want to incorporate bent vertical lines, contrast fall off, or hard to control flares.

The mechanics of the lenses are a marvel as well, and they are heavier than some, but not so large as to prevent gimbal work. From a service standpoint they are a breeze, especially compared with their over-engineered kin, the Master Primes. It's as if ARRI lens designers were out to prove how complicated they could make a housing and mechanics on the Master Primes, and now their design process has matured a bit, and in the pursuit of perfect optics they have simplified things. Lens techs love the MA's because they can quickly get into the guts of the lens and perform adjustments and repairs, something that is much more laborious to do on master primes.

I recently heard an interesting anecdote from a successful director who was shooting a famous A-List female pop star. When this star heard that the project was to be shot anamorphic she forced shooting to stop. She had heard those lenses can make faces or bodies look wider or unflattering, and for some types of talent, where how they look is critical, that is unacceptable. Rightly or wrongly, that rumor she had heard was about to cost the production days of re-shoots. But when she was shown test shots from the master anamorphics, and agreed that they showed her accurately and without any ugly distortion, the shoot was back on track.

The lesson? Perceptions mean a lot when it comes to glass, and not everyone on set understands lenses the way camera people do. Having the word “ARRI” and “Master” on a lens, can do a lot to smooth out some tensions.

Do they flare? Of course, they are still anamorphic after all. But they flare in a buttery soft and subtle way when compared to other sets. For those that like a bit more J.J. Abrams in their images, ARRI makes the flare sets for them. These are entirely new glass elements, front and back, for each lens. DP's can choose from replacing a front element or back element with the flare elements, or both, for maximum flare goodness. This test was shot in the standard stock setup with no flare sets.

Ultimately, everything comes down to personal taste and sometimes budget. After shooting many projects on Kowa anamorphics and Lomo's (both of which I still use and love), I wanted to try something where I wouldn't feel like I was fighting the lens characteristics as much. I saw the master anamorphics, and marveled at their engineering and clean simplicity, and haven't looked back since.

These lenses really are something completely new as well as completely astounding. Some people have described them as the “Master Primes of anamorphic lenses.” One could make that argument, but it’s not totally accurate. In the spherical lens world there are actually other ultra-fast, ultra-high-performance lenses that deliver tack sharp images with no aberrations and no breathing like Master Primes do. For instance the Cooke S5i primes and Leica Summilux C prime lenses are arguably in the same territory as Master Primes. However, in the world of anamorphic lenses, there currently is no other lens that compares to Master Anamorphics. They have completely rewritten the rulebook. They are able to do things that used to be impossible for front anamorphic lenses. None of this means they are “better” than the other lenses in our test. I do not like to think of lenses in terms of better or worse, but rather different tools for different jobs. Many people choose anamorphic lenses for their distortion, flares, vignetting, soft corners; all attributes that could be considered “flaws” or “imperfections,” and some DPs are looking for that. Many of those attributes are not produced by Master Anamorphics, which is also fine, because there are other DPs that need a cleaner look too.

Some things that stood out in our testing were how sharp, clean and high-contrast the lenses were, even wide-open. The bokeh is a nice clean oval. Uniquely, in some parts of the frame the ovals come to a point at the top and bottom rather than a rounded shape. Another thing that hits you especially on the wide-angle lenses is the 3 dimensional feel the lenses produce. They really make the subject pop from the background and it’s especially noticeable when the camera pans in the main part of our test. The lenses can produce blue streak lens flares if you really blast the front element with light, although it’s more subtle than most of the others. What makes them truly unique is that they have almost no distortion, no breathing and are extremely sharp from the center of frame right out to the edges. No front anamorphic lens has been able to boast performance like that. Their design is clearly something completely new and from the rumors floating around it seams like they placed their cylindrical elements in some sneaky places in order to get the anamorphic qualities they wanted and none of the ones they didn’t want. The folks from Arri and Zeiss will not hesitate to tell you that they weren’t going for the “classic” or “vintage” anamorphic look when they designed these lenses. If you do want some anamorphic magic, but don’t want all the quirks of typical front anamorphic lenses, these are the right choice.

I first encountered ARRI / Zeiss' Master Anamorphics right when the initial first sets of 4 focal lengths was delivered. CamTec in Burbank was among the first rental houses to receive them globally, and we were looking for something different for a pet project we were prepping: a dark re-imagining of the Power Rangers series. We had bandied about whether to shoot anamorphic, or spherically, but had tired of going over the top with anamorphic lens flares and accentuating anamorphic’s distinct characteristics. We also knew we would be shooting in low light conditions, so we needed lenses that were fast enough to enable us to move quickly and not require larger lighting units.

Once we embraced the idea of a cleaner look than a “JJ Abrams” style of anamorphic, the Masters became very appealing. At T1.9 across the set, they were incredibly fast for anamorphic lenses. Also, their advanced optical design allowed for next to no distortion, even with wide lenses, and virtually no lens breathing. The were very well controlled for the majority of lighting conditions, but you can get them to flare if you really bash them with a light in the frame. Once we got over the preconceived ideas about what anamorphic lenses should look like, we really grew to love these lenses and have used them many times on projects like Taylor Swift’s “Bad Blood” music video and many car commercials. 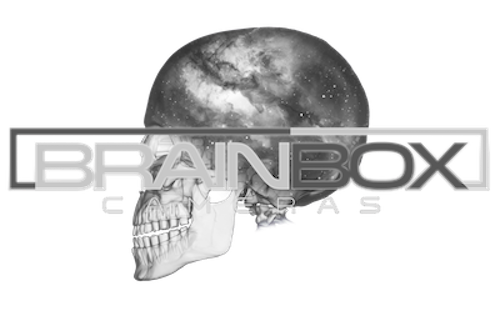 These lenses extend the Master Prime concept to the anamorphic format. Their key innovation is dispersing the anamorphic optical power throughout the lens rather than at only one place. They have high contrast, low flare, good sharpness, minimal lateral color and the least distortion of any anamorphic tested. They are also the most consistent lenses when comparing focal lengths within a set. These lenses represent the state of the art technical performance in a 35mm format anamorphic lens in PL mount.

These are very modern designs and are meant for digital cine cameras. It should be noted that we did not have the proper glass way (simulating the IR and OLPF on a digital cine camera) for the test projector mount on hand at the time of the tests, so it is possible that these lenses could perform even better in projection with the glass way.
Projection scores range from .01 to 1.00 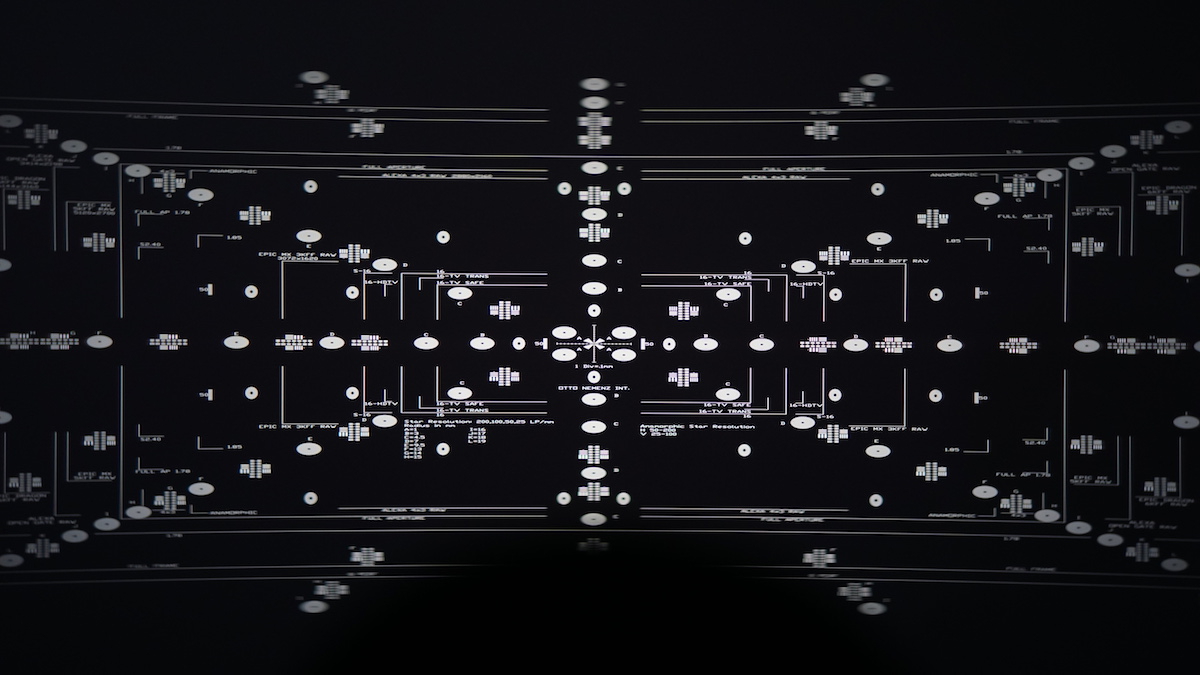 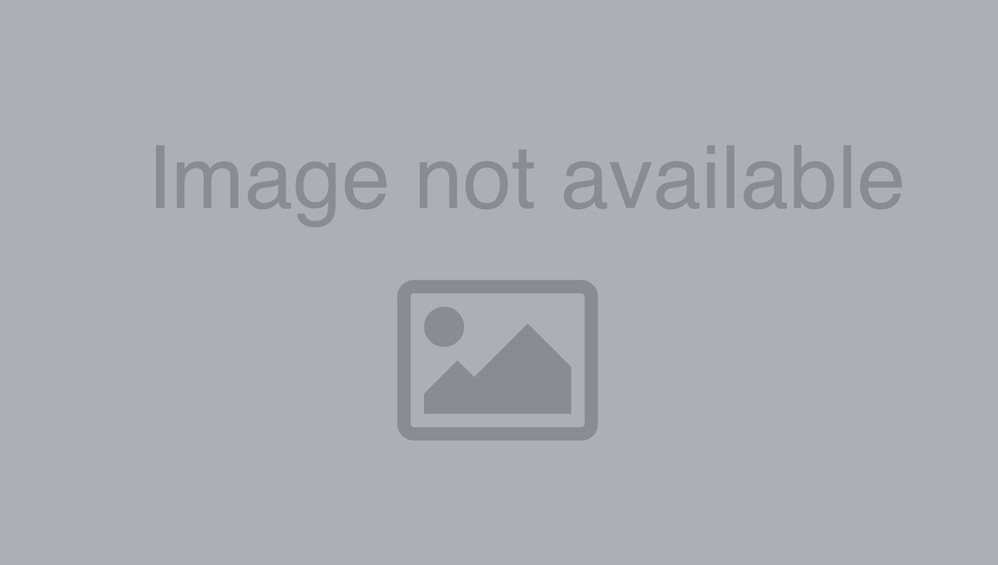 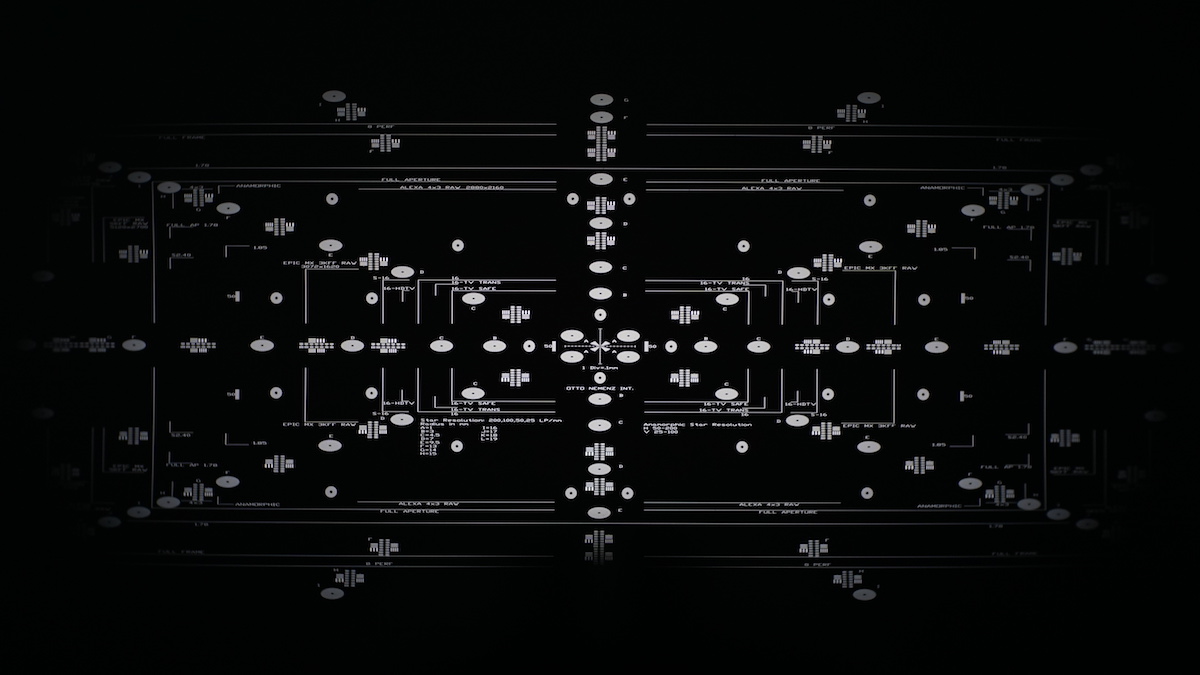 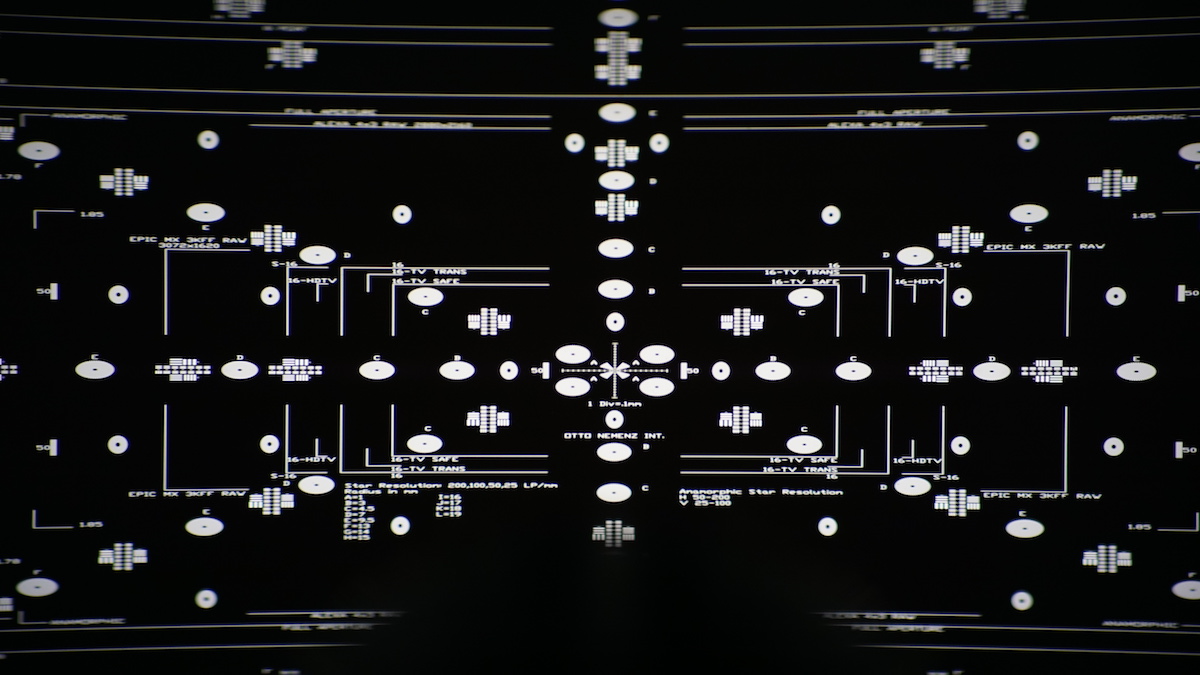