About the Atlas Orion Series Anamorphic

The Orion 65mm prototype is the first lens produced by American lens maker Atlas Lens Co. Their goal was to make an affordable modern anamorphic lens, with high performance but vintage character. Their prototype 65mm lens offers impressive wide-open performance, fast maximum aperture, perfectly oval bokeh and vintage style lens flares. This lens gives a sneak peek at the newest member of the anamorphic club.
"This lens was shockingly beautiful. At its price point, size and solid mechanics, I can't wait to see the rest of Atlas' line of primes."
Brent Barbano, Cinematographer, Co-Founder of ShareGrid

The Atlas lens was among the newest options of our test. The lens we were testing wasn’t even a production unit! I had seen these lenses in-person at NAB, but including them in our baseline test alongside some of the most popular anamorphic lenses in the world was a real test. A test that the Orion Series excelled at. Despite a bit of excess focus fall-off and distortion, which I expect to be corrected to a degree in the final model, the Orion series was a pleasant surprise.

This lens was definitely the new kid on the block. I had heard some rumors about the lens but was not quite sure what to expect, especially given it's price tag.  After throwing it up on the camera, it was really quite something to see how damn good it looked compared to everything else.  There is definitely some very interesting things going on inside of the lens and being able to go to a T2.0 is a huge plus. This lens has a very pleasing bokeh. I'm very excited to see how the rest of the focal lengths stack up to this 65mm.

Atlas is the newest player to the anamorphic game. In fact they are so new that at the time of our test the only lens that was available to us was one of their three 65mm T2 prototype lenses that had just been manhandled by thousands of hands at NAB 2017 and was on its way to CINEGEAR - Los Angeles 2017 just days after our test. We were excited to test this lens even though it’s just one focal length, because Atlas is one of very few companies making new Anamorphic lenses and their price point is significantly lower than their competitors. The mechanics are a very modern design with a barrel that looks somewhat like Hawk V-Lites. They are fast at T2 have a 14-blade iris, promising perfectly oval bokeh at any T stop and they will be the only modern anamorphic lenses that will feature interchangeable lens mounts. As of this writing Atlas plans on having PL as well as EF options. With these features and price point, Atlas is targeting rental houses as well as owner/operators.

As far as performance goes, if the 65mm is any indicator of how the rest of the series will be, these lenses will be able to hold their own against the big boys. It looks like these lenses will be a nice combination of vintage and modern. The 65mm is quite sharp even wide open and has good contrast. It’s pretty sharp right up to the edges too. Bokeh and flares seemed to be a priority in the design of this lens. Bokeh stays really nice and oval shaped almost no matter where pinpoint light sources fall in the frame and at any T stop. The flares are reminiscent of vintage lenses with strong blue/purple streaks mixed with warm orbs. The design of the focus system has kept breathing fairly low for an anamorphic lens. It’s too early to judge these new lenses with only the 65mm to test, but if this lens is any indicator of what’s to come, these lenses will be very popular because of their modern yet expressive look, solid mechanics and relatively low cost.

While there is only three physical prototype 65mm Atlas Orion lenses kicking around, the prospect of a high-quality, low cost anamorphic checked a lot of boxes for attendees of NAB and CineGear this year. The prototype 65mm delivered a very respectable anamorphic image. Not free from aberrations or some of the hallmarks of other vintage anamorphic lenses seen in this series of tests, they did feature a very sexy mechanical design and operation. Time will tell how the rest of the lenses for this set shape out, but the take away from their first offering should be: keep an eye out for these.

This was a prototype 65mm focal length from a new series of anamorphic primes. Image quality was good in the center of the image with neutral color and good apparent contrast. Distortion and lateral color were well controlled. The new company should be successful if it can produce a full set of lenses that perform like this prototype.
Projection scores range from .01 to 1.00 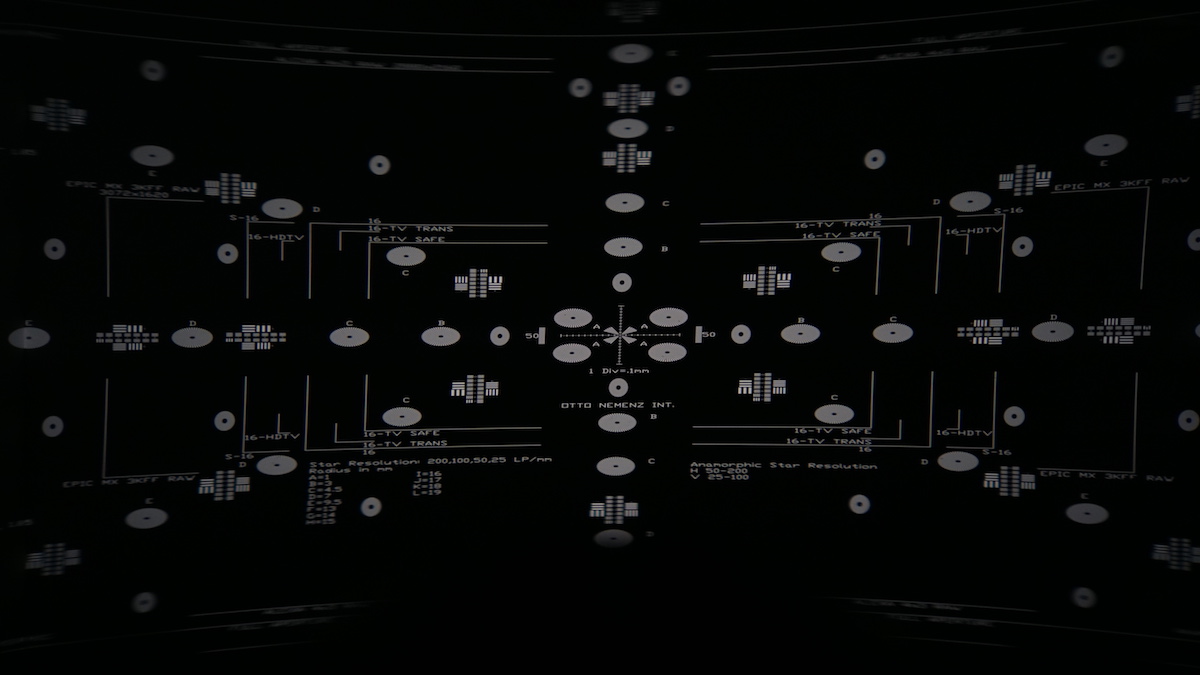